Cycling sisters get 100 women on their bikes for charity 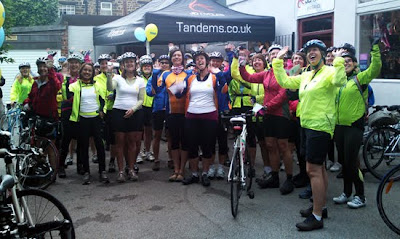 Last month I had the privilege of joining a group of more than 100 women riding 100 miles across Yorkshire in order to raise money for Marie Curie.The weather on the day was a dull and wet, not what you’d hope for on a July Sunday, but the rain didn’t dampen spirits and many of the participants described both the day, and the training leading up to it, as a life-changing event.

The event’s success was all down to the hard work of two sisters, Claire Macina and Adele Wilkin from Ben Rhydding near Ilkley, .

The sisters organised the event to raise money for their local Marie Curie hospice in in order to show their appreciation for the care and support the hospice has given to their terminally ill mum, Sheila.

Adele, a volunteer fundraiser at the hospice says, “Mum has lived with cancer for 17 years and always faced the treatment with a positive attitude, but in November 2009 she took a turn for the worse. The Marie Curie Hospice turned her around and I think that without their help mum would have lost her will to live a long time ago, it’s such an amazing place.”

A member of staff at their local cycle shop, JD Cycles in Ilkley, suggested getting 100 women together to ride 100 miles and the idea was born. Claire and Adele hoped that by asking each of the participants to raise £100, they’d be able to reach their fundraising target of £10,000. An article in the local evening paper gave the sisters a publicity boost, and by March, 125 women had signed up for the event, many of whom were new to cycling. 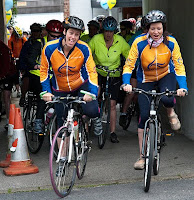 “What amazed me the most was the amount of novice riders who signed up. Many have changed their whole lives by taking up cycling for the first time, says Adele.

She adds, “Lots of ladies have lost weight and got fitter, including myself – I’ve lost 32lb!”

The route from Ilkley to Selby and back via Wetherby and York, took advantage of the traffic-free cycle network that runs between York and Selby on a disused railway line, providing an ideal environment for novice cyclists to build up to the event. Training rides were set up prior to the race and many of the participants met regularly, increasing their mileage month by month in preparation for the big day and forging new friendships along the way.

The event took over a year to organise and the sisters overcame quite a few challenges along the way.

Adele says, “We knew that many of the riders had started out as novices and we were concerned that on the day people would get lost or even injured.

She adds, “Marking out the route markings was a challenge - it took three days in total, but the support provided by our team of volunteers ensured the ride was fully supported on the day and our out-riders helped with over 30 punctures.”

Claire and Adele (pictured) led the ride out together from JD Cycles and both described the start as emotional. “We had a huge sense of relief that we’d done it and could just enjoy the ride.

Claire adds, “There were some goose-bumpy moments, we chatted to lots of riders along the route and they all had their personal reasons for supporting Marie Curie.”

There were tears of joy at the finish line for many of the participants who were welcomed back home to Ilkley by a cheering crowd of family and friends.

One competitor says, "It’s been an amazing journey of blood, sweat and tears but one I will remember for ever"

The great news is that although Claire and Adele initially aimed to raise £10,000 for the hospice, their total amount is closer to £20,000, and the sponsor money is still rolling in.

And would they be tempted to do it all again?

“We already have two sponsors lined up for next year’s event and it’s taking place on July 15.”

If you’d like to find out more about next year’s event email Claire or catch up with the group on their Facebook page.